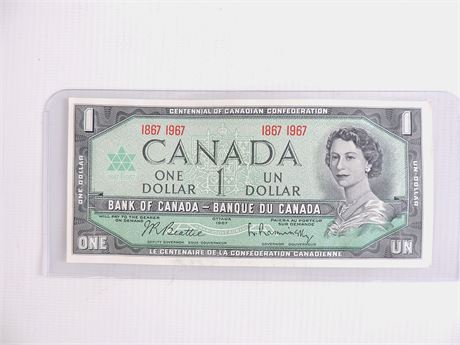 This fantastic Canadian $1 dollar bill commemorates the 100th anniversary of the country's confederation making it a wonderful piece of Canada's rich heritage. Whether you're a seasoned collector, just starting out or even just looking to possibly make some profit, this bill is definitely something you won't want to miss out on.

Please note: this bill has NOT been professionally graded or appraised.

Condition: Bill appears to be in circulated condition and shows signs of some discoloration, wear and creasing. Again note that this bill has NOT been professionally graded or appraised.

Item is sold in 'as is' condition.
Shipping
Payment Options