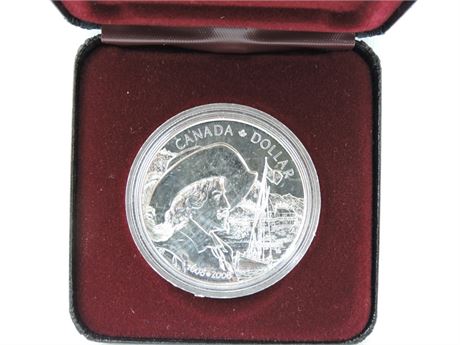 Issued by the Royal Canadian Mint in 2008, this beautiful sterling silver $1 dollar coin commemorates 400 years since Samuel de Champlain landed on the shores of the St. Lawrence River, an event that would lead to the founding of Quebec City. Whether you're a seasoned collector or just starting out, this dollar coin is definitely something you won't want to miss out on.

2008 Canadian Quebec Commemorative $1 Dollar Coin:
- Composition: 92.5% sterling silver, 7.5% copper
- Finish: Brilliant
- Obverse reads: "ELIZABETH II D.G. REGINA" and shows a right facing portrait of Queen Elizabeth II and marked with the Royal Canadian Mint emblem
- Reverse reads: "CANADA DOLLAR 1608-2008" and shows a portrait of Samuel de Champlain with the habitation he built at the foot of Cap-aux-Diamants at what is now known as Quebec City in the background. The boats depicted represent the importance of the city's position on the St. Lawrence River as the gateway to North America.
- Coin is sealed in a protective plastic case and is housed in a velvet lined display gift box

Please note: this coin has NOT been professionally graded or appraised.

Condition: Coin appears to be in uncirculated condition and comes sealed in a protective plastic case. Again note that this coin has NOT been professionally graded or appraised. Royal Canadian Mint issued information card is not included.